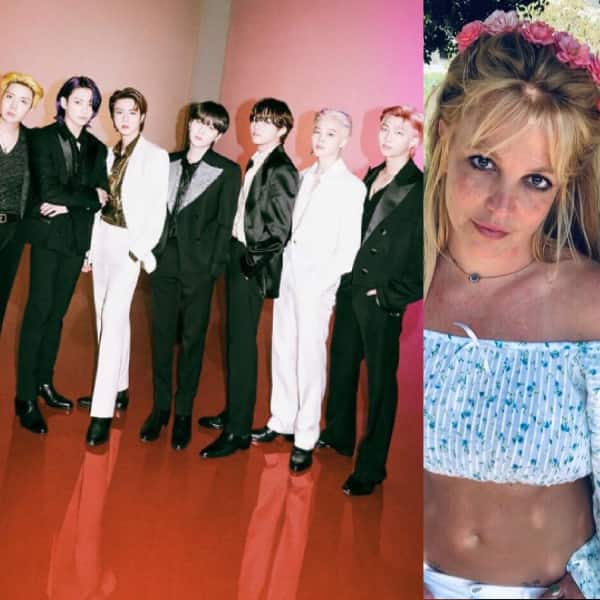 As the day comes to an end, here’s your dose of trending Hollywood stories. Hollywood never sees a dull day and we always have the celebrities making some noise. Today, among the newsmakers are K-pop band BTS, Britney Spears, model and Justin Bieber’s wifey Hailey Baldwin and many others. Also Read – Trending Hollywood news today: BTS members Suga and J-Hope express gratitude to ARMY, Black Widow receives a bumper opening at box office and more

K-pop band BTS and Ed Sheeran recently collaborated for a song called Permission To Dance. But did you know that they have never met in person? Yes, this confession was made by septet on Jimmy Fallon’s show. They were quoted saying, “PTD is a song that will get everybody’s heart pumping and dance again. This is actually a gift of Ed Sheeran of course one of our friends… Respect, big love to Ed. We also prepared something called Permission to Dance challenge with YouTube shorts so please stay tuned for more. PTD let’s go… We can’t believe that we haven’t met him yet. This is the second project with him but we never met him yet.” Also Read – Bradley Cooper-Jennifer Esposito, Jennifer Lopez-Cris Judd, Britney-Jason Alexander and more – Hollywood’s short-lived marriages that shocked everyone – view pics

After the judge’s decision to allow her to select and hire a new lawyer for herself to fight the conservatorship battle, Britney Spears expressed her happiness on Instagram by sharing a video. Alongside she wrote, “I feel GRATITUDE and BLESSED !!!! Thank you to my fans who are supporting me … You have no idea what it means to me be supported by such awesome fans !!!! God bless you all !!!!! Pssss this is me celebrating by horseback riding and doing cartwheels today.”

Reportedly, a video of Justin Bieber allegedly yelling at Justin Bieber went viral on social media leading to speculative stories. However, Hailey shut also the false narrative by sharing a post on Insta stories that read, “Reminiscing on how amazing last weekend was. Had the best time surrounded by so much love. Any other narrative floating around is beyond false. Don’t feed into the negative bullshit peeps.”

Chrissy Teigen says she is lonely and depressed

After all the bullying allegations, Chrissy Teigen penned a lengthy note on social media stating that she has now been put in ‘cancel club’. She wrote about how she feels depressed and lonely because of all the silent treatment. “I feel lost and need to find my place again,I need to snap out of this, I desperately wanna communicate with you guys instead of pretending everything is okay. I’m not used to any other way!! Cancel club is a fascinating thing and I have learned a whollllle lot. Only a few understand it and it’s impossible to know til you’re in it,” a part of her note read.

Sex and the City has an addition

HBO Max’s Sex And The City Reboot has new members on the cast. Sarita Choudhury, Nicole Ari Parker of Empire fame, and Karen Pittman, best known for The Morning Show have been reportedly signed for the show.