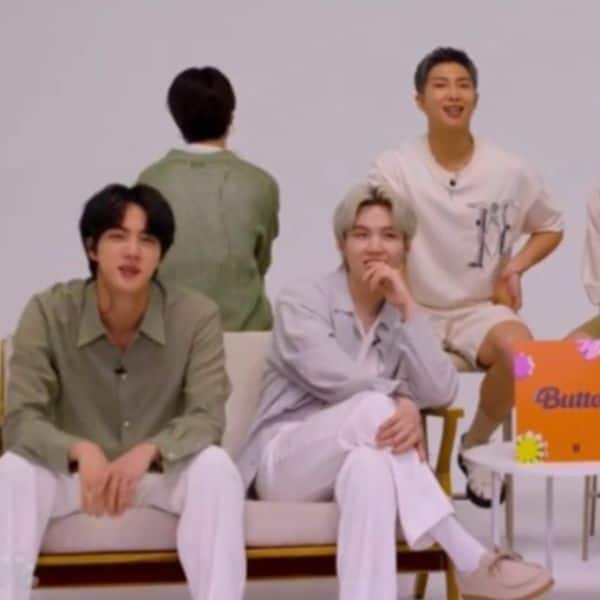 BTS and Jimmy Fallon are always a great combo. The Korean septet came on the show to promote Permission To Dance and the Butter Album. As always, there was the hilarity and awkwardness that makes every BTS interview. The boy band made some revelations on the show. The big one was that they have never met Ed Sheeran in person. He is the writer of Permission To Dance. There was a fun moment when Jimmy Fallon showed them a picture of them from their first ever stage performance. He also asked them to address rumours. Here are five highlights from the show…. Also Read – Trending Hollywood news today: BTS members Suga and J-Hope express gratitude to ARMY, Black Widow receives a bumper opening at box office and more

RM’s big disclosure
Jimmy Fallon asks the group if ARMY was not the first choice of name for the fan base. He replied with a Yes. As we know, BTS is Bangtan Sonyendeon, which means Bulletproof Boy Scouts. And the fan base is called ARMY. But RM said the first name they thought of is Bell. He said they felt it was more in sync with the power vibe of Bangtan. RM later burst out laughing saying that they are glad that did not name it Bell. Just imagine fans jingling bells at their concerts. It would be pandemonium! Also Read – BTS members Suga and J-Hope express gratitude to ARMY as Butter continues to top on Billboard Hot 100 for the seventh consecutive week

Jimin’s embarrassment
The host went a step ahead and showed them an old pic from the first they first stepped on stage. Seeing the pic, Jimin was too embarrassed and rotated his chair to show his back to the audience. The video is making fans go ROFL. Also Read – BTS: RM and Jimin wants to switch bodies with THESE members for THIS reason – watch video

He also said that they had plans of keeping his stage name as Baby J or Baby G but he felt weird saying it, and decided to stick to his real name Park Jimin. Jimmy Fallon said he could call himself Jimin Fallon. From being James Corden’s Baby Mochi to Jimin Fallon, he is the baby of all talk show hosts.

SUGA’s Eminem love
Jimmy Fallon also asked SUGA about his parents’ reaction when he brought home a Eminem CD as a teen. SUGA said he got it home when he was 12-13. As we know, Min Yoongi loved rapping. He said that he did not understand English and translated lyrics weren’t available so he enjoyed the music without knowing the words. Even his parents had no objection as they did not know the lyrics too!

Jin’s cooking skills
Jin/Kim Seokjin is the hyung who loves to cook and fed. He said that the cooking skills of the group were more or less at par with each other. He told Jimmy Fallon that he did cook kimchi fried rice for him when he comes to Korea.

Kim Taehyung’s humour and secret
Kim Taehyung/V again showed that he can say the funniest of things with a straight face when he spoke about how his friend failed to make the cut in Big Hit auditions. As we know, he got chosen instead. RM also revealed that V/Kim Taehyung sleeps with his eyes open. Now, that is odd!