“I often find, and especially in this past year, I think so many of us realized how much happens in the quiet,” the Duchess of Sussex, 39, told NPR on Sunday, June 20.

The book, illustrated by Caldecott Honor recipient Christian Robinson, shows fathers sharing small moments — such as applying a bandage or tying their shoes — with their sons on benches. Meghan was inspired by the 36-year-old Duke of Sussex‘s everyday bonding with Archie, 2.

“It was definitely moments like that, watching them from out of the window and watching [my husband] just, you know, rock him to sleep or carry him or, you know … those lived experiences, from my observation, are the things that I infused in this poem,” she explained.

The former actress wrote the poem as a gift for Harry on his first Father’s Day. The poem was engraved on a plaque for the bench she gave her husband for the same occasion.

“As most of us do, you go, what am I going to get them as a gift? And I thought I just wanted something sentimental and a place for him to have as a bit of a home base with our son,” the former Suits star recalled.

Meghan wrote the book before Lilibet Diana was part of their family. The author gave birth to the youngest of Queen Elizabeth’s 11 great grandchildren on June 4.

“She is more than we could have ever imagined, and we remain grateful for the love and prayers we’ve felt from across the globe,” Meghan and Harry said in a statement two days later. “Thank you for your continued kindness and support during this very special time for our family.”

While promoting a book release just after giving birth is a big task, Meghan has help from her mother, Doria Ragland.

“[Doria has] been helping out at the house and her hands-on support is a major bonus,” a royal insider told Us Weekly exclusively earlier this month after Meghan brought baby Lili back to the family’s Montecito, California, home.

“Meghan’s so grateful to have her mom to lean on, and Harry just adores her,” the source continued.

The duchess is also grateful to her many readers. The Los Angeles native, who announced the project in May, reached No. 1 on The New York Times bestseller list one week after her book’s release. 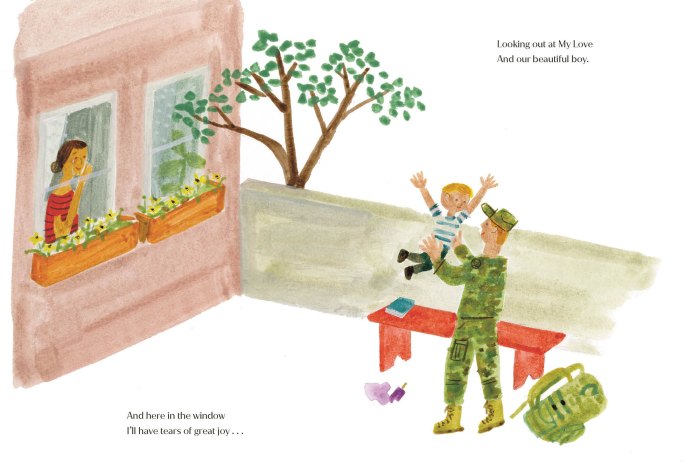 “While this poem began as a love letter to my husband and son, I’m encouraged to see that its universal themes of love, representation and inclusivity are resonating with communities everywhere,” she captioned a Thursday, June 17, blog post on the Archewell website. “In many ways, pursuing a more compassionate and equitable world begins with these core values. Equally, to depict another side of masculinity — one grounded in connection, emotion, and softness — is to model a world that so many would like to see for their sons and daughters alike.”

Meghan also announced that she and Harry, with the help of Random House Children’s Books, would be donating 2,000 copies of the book to schools, libraries and more.

“After more than a year of unprecedented challenges for schoolkids and families everywhere, the duchess believes the path ahead must include a focus on well-being — and nourishing our communities through food, education, and emotional and mental health support,” a statement on the Archewell website read. “The duchess and Archewell have received the support of the publisher of The Bench to distribute 2,000 copies at no cost to libraries, community centers, schools, and nonprofit programs across the country.”

Archewell also partnered with First Book, a nonprofit dedicated to giving underprivileged kids books, to distribute the illustrated poem around the country.

Listen to the Royally Us podcast for everything you want to know about our favorite family across the pond.

Who is Jon Rahm’s wife Kelley Cahill, how long has she been with US Open ace and how many children do couple have? – The Sun