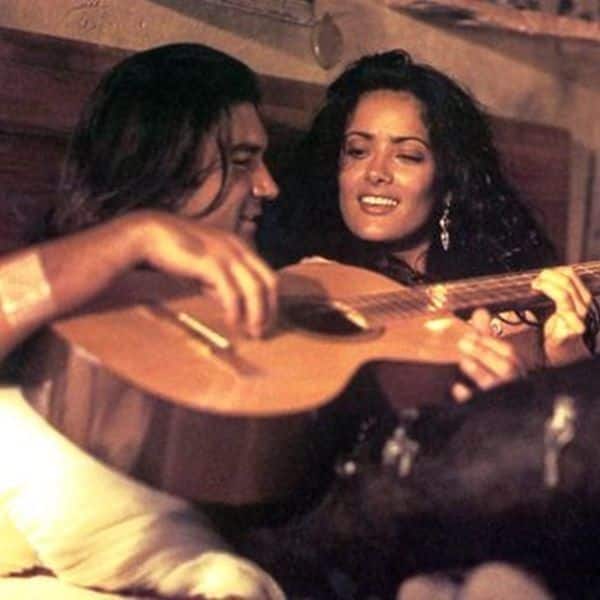 Salma Hayek got her big break in Hollywood when director Robert Rodriguez noticed her and decided to cast her in his 1995 action drama Desperado alongside Antonio Banderas. The movie started her acting career on a thundering note and became an overnight star. It also earned her the status of a sex symbol when she went breast and butt naked while shooting a sex scene with Antonio in the film. But many might not know that shooting the scene was very traumatic for her. Also Read – Coronavirus pandemic: Antonio Banderas reveals testing Covid-19 positive on 60th birthday

Detailing her experience of shooting the sex scene, Salma made it clear that her trauma had nothing to do with the director or the actor. While speaking to Dax Shepard and Monica Padman in their popular weekly podcast, Armchair Expert, Salma revealed that there was no mention of the love making scene between her and Antonio. It was brought to her attention after the production began. Also Read – Dolittle movie review: Robert Downey Jr.’s post Iron Man outing does very ‘little’ to give him a new family friendly franchise

Salma was very thrilled to get a big break in Hollywood but she really struggled with the love scene. When they were going to start shooting the scene, she began to sob. “I don’t know that I can do it. I’m afraid,” she kept saying to three other people on the set. Also Read – Avengers: Endgame to bag Hollywood Blockbuster Award at the 23rd Hollywood Film Awards

The director was like her ‘bro’ and his then-wife and producer Elizabeth Avellán, was her best friend. She agreed to do the scene on a closed set which had only four of them. She kept saying that Robert Rodriguez and Antonio were amazing and never put pressure on her, but the moment was very traumatic for her.

“One of the things I was afraid of was Antonio — he was an absolute gentleman and so nice, and we’re still super close friends — but he was very free. It scared me that for him, it was like nothing. I started crying, and he was like, ‘Oh my God. You’re making me feel terrible.’ And I was so embarrassed that I was crying,” Salma said.

She added, “I was not letting go of the towel. They would try to make me laugh. I would take it off for two seconds and start crying again. But we got through it. We did the best with what we could do at the time.”

Salma said that she constantly kept thinking about her father and brother, whether they will see it or will they be teased, adding that “Guys don’t have that. Your father will be, ‘Yeah! That’s my son!'” The sex scene was shot in quick cuts and Salma said that that’s the best she could do between the starts and the stops.

When the film was released, Salma said that she finally made her mind to take her father and brother to see the film. She then revealed that ‘they left the theatre during the scene and returned when it was over’, adding, “You want your father to be nothing but proud of you.”

Salma was once told she would never make it as an actress in Hollywood because she is Mexican. She credited her struggles for helping her to choose the right path.

Tom Girardi Should Not Be Evicted From His Home, Brother Says

Precious Mustapha Reveals the Moment She Realized Fate: The Winx Saga Would Be a Hit