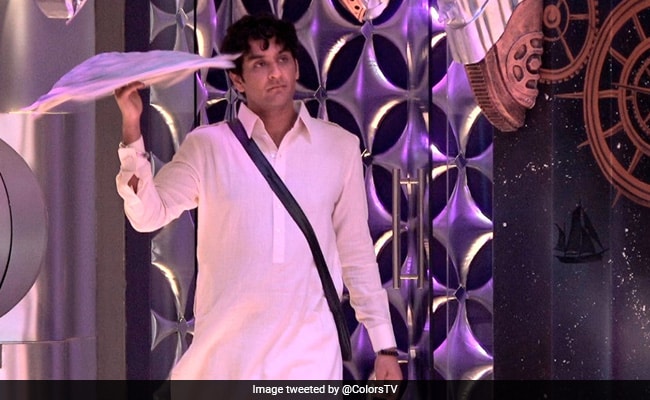 Bigg Boss 14: Vikas Gupta in a still from the show. (courtesy: ColorsTV)

Vikas Gupta became the new captain for this week in the popular TV reality show Bigg Boss 14. Surprisingly, Vikas Gupta was voted as the captain by Arshi Khan, because of whom he was ousted from the show. For the uninitiated, Vikas Gupta had pushed Arshi Khan in a swimming pool after she made a comment on his family. He returned to the game earlier this week. Coming back to this week’s captaincy task, a hot air balloon was placed in the garden area, where all the contestants had to go turn wise and they had to throw away sacks of those contenders in the swimming pool that they wished to remove from this week’s captaincy. Arshi Khan, who was the last contestant to be present in the hot air balloon, decided to throw away Rahul Vaidya’s sack in the pool and voted for Vikas to be this week’s captain. Arshi had earlier promised that she will make Rahul Vaidya this week’s captain but she took a U-turn from her stance.

Arshi Khan’s decision to vote for Vikas Gupta did not go down too well with Aly Goni and Rahul Vaidya. An angry Aly shouted at all the contestants and said that he will never trust anyone else in the game. Rahul Vaidya too was upset and he reprimanded Nikki Tamboli for not throwing away Vikas Gupta’s sack. Nikki replied by saying that she helped him through the task and that he failed to see that.

Later during the game, Arshi Khan apologised to Aly Goni and Rahul Vaidya for ditching them in the game and rooting for Vikas Gupta. However, the two ignored her rightaway.

(Watch this space for more updates on Bigg Boss 14)

Allow Rebel Wilson, Sofia Richie and More Stars to Give You Travel Envy This Holiday Season