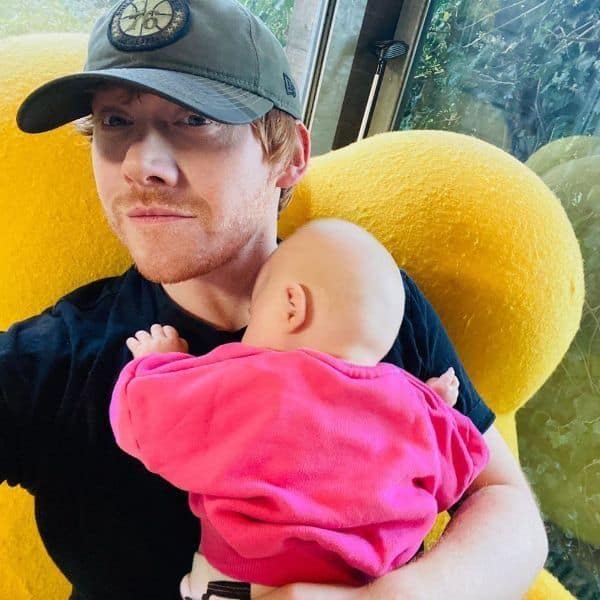 Harry Potter movies and books have always had a huge fan following. A lot of fans can go on watching the movie on repeat without getting bored. The magical world has always been something we have been dreaming of. Who had never thought of attending Hogwarts school? Just like the movies, each character of the film have been special to each one of us. Daniel Radcliffe, Emma Watson and Rupert Grint aka Harry Potter, Hermoine Granger and Ron Weasley have a massive fan following. While Emma Watson is on social media, the other two were not there yet. However, Harry Potter fans got an amazing surprise today as Ron Weasley aka Rupert Grint made his Instagram debut. Yes, you read that right. Rupert Grint aka Ron Weasley is finally on Instagram and has already crossed 2 million followers. Also Read – Congratulations! Harry Potter’s Ron Weasley aka Rupert Grint welcomes baby girl with girlfriend Georgia Groome

Rupert Grint introduced his daughter, Wednesday Grint and posted an adorable picture with her. Along with the picture, Rupert wrote, “Hey Instagram….only 10 years late, but here I am. Grint on the Gram! Here to introduce you all to Wednesday G. Grint. Stay safe, Rupert” Take a look at his picture: Also Read – After FRIENDS reunion, the Weasleys of Harry Potter decided to have one of their own!

Well, Tom Felton aka Draco Malfoy’s comment on his post grabbed our attention. He wrote, “Welcome Weasley, it’s about time. Love to Wednesday xx” This totally reminded us for the way Draco called Ron in the movies. Rupert Grint and actor-girlfriend Georgia Groome welcomed their first child in May. However, they choose to keep things private. In May, a representative had told People Magazine that the couple sought privacy at this special time. The representative said, “Rupert Grint and Georgia Groome are delighted to confirm the birth of their baby girl. We would please ask that you respect their privacy at this very special time.” We are happy to welcome Ron Weasely on Instagram! Also Read – Rupert Grint aka Ron Weasley of Harry Potter fame claims he lost a lot of friends on his way

Turns Out, Joe Biden’s Dog Major Will Be The First Shelter Dog To Live In The White House In History

These 25 Country Music Romances Are Straight Out of Love Songs