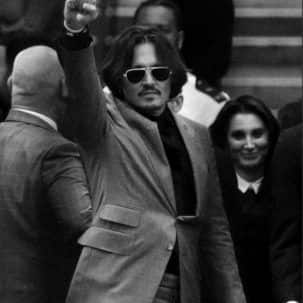 Fans of Johnny Depp are extremely upset. The star put up a post on his Instagram account saying that he is leaving the Fantastic Beasts franchise on the request of Warner Bros. This has happened after he lost a case in Britain against a tabloid that called him a ‘wife-beater’. He will not be seen in the role of the villain, Gellert Grindelwald. He wrote, “I have respected and agreed to that request.” It seems the production of the third film in the Fantastic Beasts franchise resumed shortly. It is expected to release in 2022. Johnny Depp wrote that he planned to appeal against the judgement. He said, “My life and career will not be defined by this moment in time.” Also Read – Trending Entertainment News Today – Saumya Tandon’s personal hair dresser tests POSITIVE, Bechara, Hrithik all set to travel back in time

Fans of the actor are very upset. They feel it is unfair to target Johnny Depp. Amber Heard is still a part of Aquaman 2. This is how they expressed their dissatisfaction. Also Read – Johnny Depp-Amber Heard case: An enraged Johnny throws a wine bottle in an unseen video presented to High Court

Johnny Depp was asked by Warner Bros. to resign as both Captain Jack Sparrow and Grindelwald due to allegations against him from Amber Heard.

Keep in mind that Amber admitted to abusing Depp, yet the judge in the UK called him a “wife beater.” This is unfair and so sad. pic.twitter.com/8jSoWVze11

Amber Heard is a fucking abuser. Now Johnny Depp is about to lose his career due to domestic violence. he lost two iconic roles due to Amber Heard.
Fuck Amber Heard. we will not stop until Johnny Depp gets justice#JusticeForJohnnyDepp #AmberHeardIsAnAbuser

Thank you for your message and with all my heart I hope that you will soon come out of this difficult test that gave you life, but take heart you have the support of all of us, that is, your fans. I’m with you #JusticeForJohnnyDepp ❤️❤️

standing with you, brother. #JusticeForJohnnyDepp

The absolute most terrifying part of what’s happening to Johnny Depp is the message it sends to male abuse victims. They had a chance to provide a platform for and encourage them to come forward, and instead they made an example of him in the worst way.#JusticeForJohnnyDepp

In July 2020, Depp’s counsel said that he was subjected to abuse by Amber Heard. It was said that Depp would lock himself up in the bathroom whenever he saw her getting aggressive. She has alleged that she was subjected to domestic violence by him. Also Read – ‘I was poisoning myself beyond belief,’ — When Johnny Depp revealed he began smoking at 12 and taking drugs as a kid

My 38 Photos Of Hilariously Adorable Squirrels