The Craft: Legacy is an impressive act to follow. While the magic of the original ’90s classic is unmatched, the newest addition to The Craft film series is a modern take on the teen witch story. Beyond themes of embracing personal power and stepping into womanhood, director Zoe Lister-Jones’s sequel explores intersectionality and elemental magic — reflected in the coven’s contemporary style, which was created by costume designer Avery Plewes.

“I think it’s a spiritual process for a lot of people,” Plewes told POPSUGAR when asked what magic means to her. “Magic is about embracing your power within and sort of getting in touch with your desires.” Plewes loved The Craft growing up and thinks Lister-Jones did “a really good job of creating unique characters who are individuals in their own right.” 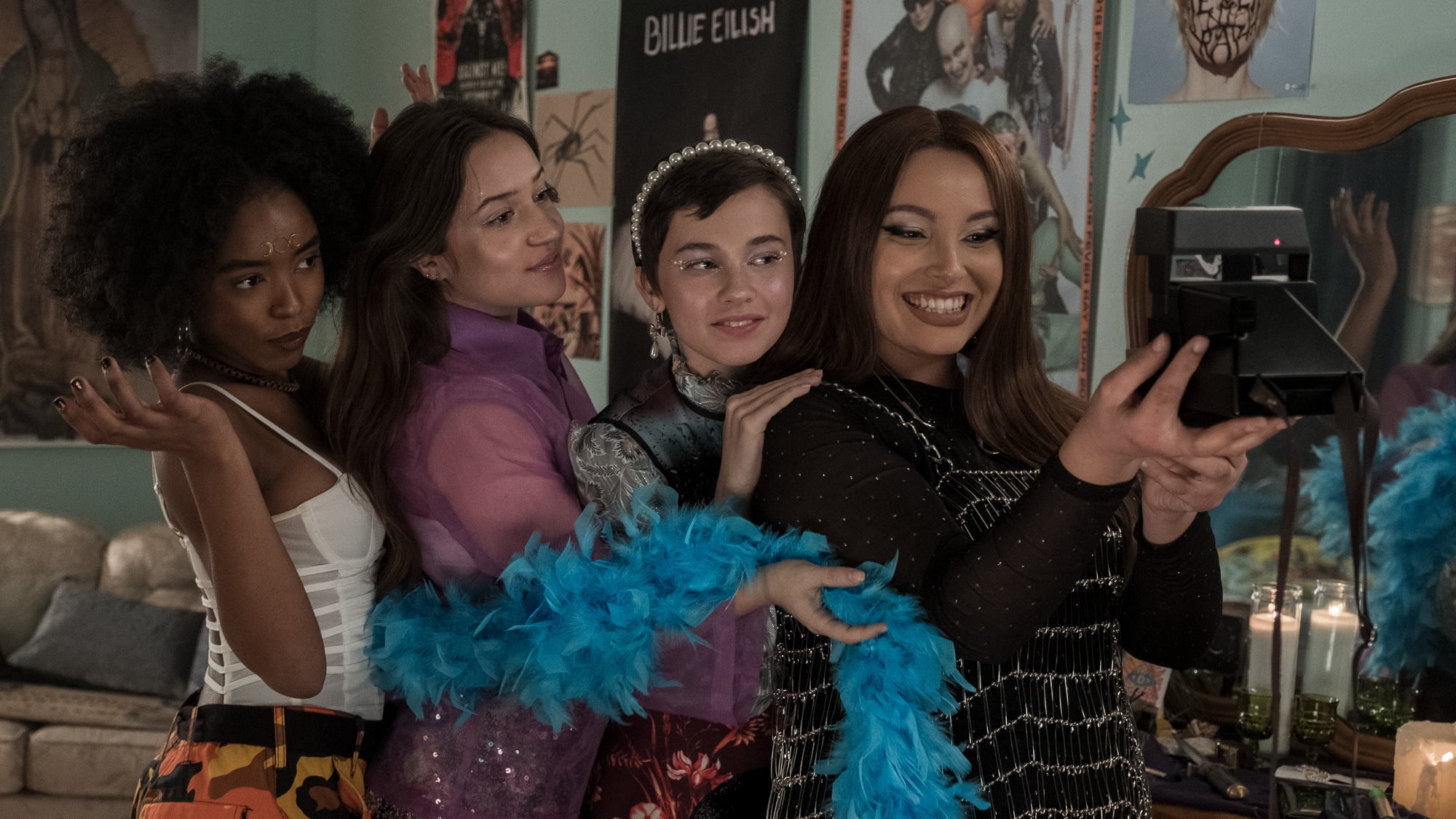 “A lot of times in Hollywood, you see archetypes of young girls that are repeated over and over again,” she said. “The original Craft was one of the first teen movies with an all-girl cast that had really diverse personality types. Zoe Lister-Jones [the director] expanded on that and created four new characters who are totally different but also have the same core principles as the original cast, like the same moral compass in a lot of ways. The original was about these four kind of outcasts finding each other and creating a group together. This one is more about four individuals who are very, very different, who are accepting of the fact that they are different from the status quo and united in that.”

“This one is more about four individuals who are very, very different, who are accepting of the fact that they are different from the status quo and united in that.”

“Lily’s element is water, so the pearls she wears represent water, she mostly wears blue, and her crystal is aquamarine. Tabby is fire, so her main color was orange and a lot of colorblocking. She also wears a lot of copper, and there are some flame motifs within her costumes. I think the first day of school, she’s wearing a flame shirt, and she has flame socks on another day. And then each girl had a crystal, so Tabby’s was a sunstone. Lourdes is earth, so her main color was green, malachite was her crystal, and she wore a lot of plaid and velvet to represent earth.”

“Frankie is air and her color is purple,” Plewes continued. “Her crystal is amethyst, and there is a fair amount of white in her closet. The fringe jacket at the end scene of the film is a reference to air. When you think of air, a lot of people would go like ethereal and kind of very dreamy, but I wanted it to actually feel very chaotic with her closet. And so she doesn’t wear a lot of jewelry because she already has tattoos on her fingers, and I felt like that was kind of enough.”

As well as the four elements, our new coven’s wardrobe touched on the intersectional experiences of womxnhood. Lourdes, a trans witch, confidently confirms that “trans girls have their own magic, too.” Tabby, as a Black witch, has a more honest dialogue around race than Rochelle did in the first film by sharing with her otherwise white coven that she wishes she had more Black friends. With Lily, the centre of the movie, we see her playing with gender expression through her style, which Plewes said is inspired by ’90s photos of stars like Winona Ryder and Cate Blanchett with a shaved head.

“For [Lily], I looked at a lot of people who dress in an androgynous fashion,” said Plewes. “My first meeting with Zoe [the director], we talked about how, as a young girl, when you’re discovering your body and your body’s changing, and you’re in high school and you’re trying to figure out who you are, your closet tends to change a lot and evolves. Sometimes it’s very masculine, sometimes it’s very feminine, sometimes it’s very androgynous. I also find a lot of times in Hollywood, you see very one-dimensional young women as archetypes. And so it was really important to me that we saw this young woman who is sort of finding her powers within the story. Also, you see that visually through her exploring different silhouettes. That was really my biggest inspiration, just the young teenage girl trying to find herself.”

Holiday Gifts for the Beauty Lover 2020